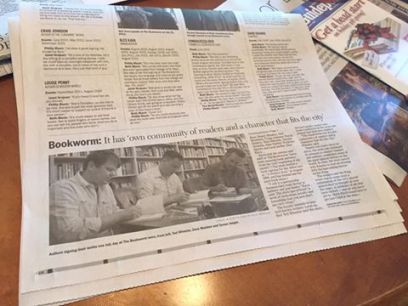 It’s nearly been a month since Bad Faith was released. I’ll have some photos from the book tour posted here before long, as it’s been an exciting month of travel to get out and talk to as many people as possible about my first book. After 17 out of 30 days spent on the road, in 12 different cities around the Midwest and both coasts for 11 readings and events, some family vacation mixed in along the way, it’s nice to be home in content exhaustion. I met and reconnected with so many great friends and booksellers along the way, the last month was a real privilege. More on this soon.

In the meantime, here’s a gaggle of links to press the book has received.

The Rumpus said that “Bad Faith builds a world that exists for its own purposes. The collection is interspersed with vignettes that lead like breadcrumbs from the opening piece to the last. The finale, also titled ‘Bad Faith,’ unfolds in a three-part structure, guiding us back around to the beginning and answering the question that has been on our mind since page 23. It ties the whole collection together and ends the book on a different—and more intriguing note—than it opened on. To say more would be to spoil the treat. Suffice it to say that if a novel is meant to end with a sense of opening out, then this collection leaves us eager for more of Wheeler’s dark, quiet world.”

The New Territory said that, “In Bad Faith, Theodore Wheeler’s debut collection of short stories, it is certainty that causes trouble. Ideas become boundaries, lines any reasonable person might draw for him or herself: beliefs in who they are or were, that what they’re doing is the best thing for them. Marriages, homes, children, careers. And yet here, at the borders of identity and place, is where Wheeler makes his incision.”

Fiction Advocate says that “Wheeler’s characters are hopeless but resolute, savvy and unremorseful. They face the world head on, acknowledging its ugliness and its dark side. Like Rodney, we readers remain alert to the presence of danger and death—the entire collection hints of it. Yet as the title suggests, this is a promise made in bad faith. Wheeler makes us think we know what will happen, and from what direction the danger will come, only to show us just how mistaken we are.”

Blue River literary journal interviewed me on their blog, posing 10 questions about the writing life after grad school and my path to publishing books. I’m not sure how insightful my responses are, but I did my best. Here’s a sample: “Like a sea turtle, those first few steps outside the shell can be treacherous, but I didn’t have to explain to anyone why I was still writing and that was tremendous. Not that there haven’t been a lot of bumps along the way. Having some success to point to never hurts, though.”

The Daily Iowan previewed my reading at Prairie Lights, saying that “Wheeler, who also works as a reporter covering civil law, takes a different approach to the concept of belief in his début, Bad Faith.”

The Omaha World-Herald featured a few quotes from me about local bookstore The Bookworm (along with the above photo) and earlier gave a preview of Bad Faith in its Bookends section with a nod to my forthcoming novel.

Also, we’re doing a Goodreads Book Giveaway. Please stop by and enter if you’re on Goodreads.

See the giveaway details
at Goodreads.