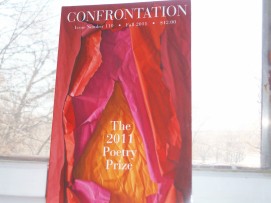 Confrontation (No. 110, Fall 2011) arrived in our mailbox today! The issue features my short story “The First Night of My Down-and-Out Sex Life,” among many other pieces.

“First Night” is part of a series of stories I’ve been working on the past couple years. The other stories include “The Man Who Never Was” (published in Weekday), “Kleinhardt’s Women” (on Fogged Clarity last December), “On a Train from the Place Called Valentine” (forthcoming in Spring 2012 from Boulevard) and a story I’ve rewritten more than a handful of times and only recently seem to have a handle on, “The Mercy Killing of Harrison Kleinhardt.” All four stories are in my unpublished collection of short fiction, How to Die Young in Nebraska. “First Night” is my first published work that’s written from the point-of-view of a woman.

It was after a show at Sokol Underground. I’d been driving up to Omaha once or twice a week that semester and having a few drinks near the back of the room while the bands played. Nothing serious. Not like some girls. Just a g-and-t or two in that smoky basement venue under the gymnastics club, listening to the bands. I bought their albums, stuck their pins to the strap of my bag then drove back to Lincoln when the show was over. Things changed when I saw the Zapruder Films.

Information for ordering the issue can be found on Confrontation’s web site. The current issue is $12, a steal for the nearly 300-page journal.

Also, I’d like to issue a huge Thanksgiving salutation to the readers and commentators who helped revise this story and the others in the cycle–Amber Haschenburger, Lucas Schwaller, and Travis Thieszen. Thanks so much! And, I’d be remiss if I didn’t thank Jonna Semeiks (Editor of Confrontation) and her staff for putting together a great issue, and allowing me to be a part of it.