Check out this new interview of me in conversation with Ryan Borchers that’s up on The Rumpus. Thanks so much to both Ryan and the editors for making this happen. The Rumpus has been kind enough to publish reviews of my two previous books (here and here). That kind of support means so much.

This was an interesting one to revisit, as our conversation took place last January, then we edited the interview over February and March. I was really interested to see if my thinking was noticeably different here in a pre-pandemic way. Nothing stands out too much, really. But it’s worth thinking about how the notion of cyber-security and privacy from the government has evolved considerably over the last year. In the rush to find ways to keep people safe and get the economies rolling, we’re also in the process of giving up even more of our privacy than before. In that way, among many, we’re transitioning to a post-9/11 zeitgeist to a pandemic zeitgeist. It will be worth watching how the issues of privacy rights evolve as we one day move into a post-pandemic world. As I’m fond of saying, the government isn’t in the habit of giving back powers that it assumes in emergencies.

The interview itself has plenty of gems about the craft of writing novels and what it means to be an Omaha author. Please give it a glance.

Rumpus: That’s what’s so interesting to me; the book makes the reader rethink their relationship to the characters in any novel. You think you’re reading about somebody’s life, and you feel like you’re getting into that person’s skin, but this novel almost makes me stop and think, Well, how close does a reader get to any fictional, made-up character? Does that make sense?

Wheeler: I think so. There are moments in any novel—and any person in real life, too, you know—when you’re not the same person you were three years ago and the person you’re going to be in three years is different from the person you are now. Thinking about that in terms of character, it comes off false when we make our characters too consistent, instead of just letting them go through their trials. And doing that from the point of view of surveillance, where you have these transcripts of what people said in emails and phone calls, then letting them be unreliable within that, too, letting them change or contradict what the record suggests, that was exciting for me. The narration is meant to be very self-aware and playful in how it plays out on the page. And maybe the perspective helps us feel more human in a way, because even with a catalogue of all existence, there are still mysteries, exceptions, things we can only feel and not know. For a novel that’s suspicious of religion and fanaticism, this nod to the unknowable was important to do. 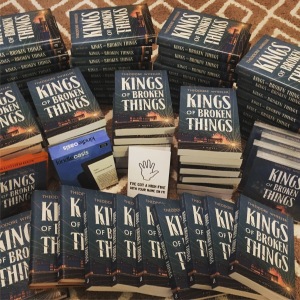 The event schedule for the launch of my novel Kings of Broken Things is coming together for the next couple months, with a dozen regional events already on the books. Check out the events page to see where you can find me, with new events being added through the end of the year.

In the likely case that I’m not coming to your town and you’d like to purchase a signed-copy, just email ted@dundeebook.co at the Dundee Book Company and it can arranged for a personalized copy of Kings of Broken Things to be sent your way. Or if you’d like to send one to a friend, just let me know who to inscribe the copy to and where to send it.

Fyi, Dundee Book Company is the roving bookstore that my wife Nicole and I are starting this fall. We’ll be setting up our new custom-made barnboard bookcart (newly built by our friends at Barnboard & Salvage in Des Moines) that we’ll be setting up at three or four events each month in Omaha. For a while we’ve lamented the need for an indie bookshop in our neighborhood, and hopefully DBC helps fill that need in some way. We’ll see where it grows (we’ll have an online store open soon) but for now we’re excited to get our cart and its six shelves of awesomeness out around Midtown!

Before I get too carried away with my own book launch next month, I wanted to take the time to wish a happy book birthday to Liz Kay and her debut novel Monsters: a Love Story. HBBD, Liz! While we’re at it, be sure to check out these two Nebraska-set historical novels that are now in pre-order–the latest from the much-beloved Jonis Agee and the debut offering from my Creighton MA compatriot Andrew Hilleman.

“A cracklingly funny and poignant debut novel about the ways we love, even when we’re not at our best. Since her husband died eight months ago, Stacey Lane’s been a certified mess—a poet who can’t write anymore, a good mother who feels like she’s failing her kids. She’s been trying to redefine herself, to find new boundaries. Tommy has no respect for boundaries. A surprisingly well-read A-list Hollywood star, Tommy’s fallen in love with Stacey’s novel-in-verse, a feminist reimagining of Frankenstein, no less. His passion for the book, and eventually its author, will set their lives on a collision course. They’ll make a movie, make each other crazy, and make love—but only in secret. As Stacey travels between her humdrum life in the suburbs of Omaha and the glamorous but fleeting escape Tommy offers, what begins as a distracting affair starts to pick up weight. It’s a weight that unbalances Stacey’s already unsteady life, but offers new depth to Tommy’s. About desire, love, grief, parenthood, sexual politics, and gender, Monsters: A Love Story is a witty portrait of a relationship gone off the rails, and two people who are made for each other—even if they’re not so sure they see it that way.”

“Ten years after the Seventh Cavalry massacred more than two hundred Lakota men, women, and children at Wounded Knee, J.B. Bennett, a white rancher, and Star, a young Native American woman, are murdered in a remote meadow on J.B.’s land. The deaths bring together the scattered members of the Bennett family: J.B.’s cunning and hard father, Drum; his estranged wife, Dulcinea; and his teenage sons, Cullen and Hayward. As the mystery of these twin deaths unfolds, the history of the dysfunctional Bennetts and their damning secrets is revealed, exposing the conflicted heart of a nation caught between past and future. A kaleidoscopic portrait of misfits, schemers, chancers, and dreamers, Jonis Agee’s bold novel is a panorama of America at the dawn of a new century. A beautiful evocation of this magnificent, blood-soaked land—its sweeping prairies, seas of golden grass, and sandy hills, all at the mercy of two unpredictable and terrifying forces, weather and lawlessness—and the durable men and women who dared to tame it.”

“A rousing, suspenseful debut novel—True Grit meets Catch Me If You Can—based on the forgotten true story of a Robin Hood of the American frontier who pulls off the first successful kidnapping for ransom in U.S. history. Once the most wanted man in America, Pat Crowe is a forgotten folk hero who captivated the nation as an outlaw for economic justice. World, Chase Me Down resurrects him, telling the electrifying story of the first great crime of the last century: how in 1900 the out-of-work former butcher kidnapped the teenage son of Omaha’s wealthiest meatpacking tycoon for a ransom of $25,000 in gold, and then burgled, safe-cracked, and bond-jumped his way across the country and beyond, inciting a manhunt that was dubbed ‘the thrill of the nation’ and a showdown in the court of public opinion between the haves and have-nots—all the while plotting a return to the woman he never stopped loving. As if channeling Mark Twain and Charles Portis, Andrew Hilleman has given us a character who is bawdy and soulful, grizzled, salty, and hard-drinking, and with a voice as unforgettable as that of Lucy Marsden in Alan Gurganus’s Oldest Living Confederate Widow Tells All—an anti-hero you can’t help rooting for.