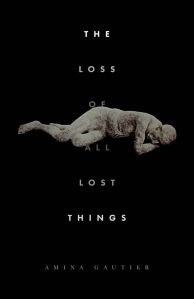 Since it’s a slow, blizzardy day here in Omaha, and I’ve got a few minutes before the girls wake up from their naps, here’s some miscellany of interest to the blog.

-First off, happy book birthday to Amina Gautier, who’s third collection of short fiction The Loss of All Lost Things was officially released from Exilir Press! Here’s what Christine Schutt had to say about the book: “Loss, loss of home, family, love–the freighted loss of children themselves–these are Amina Gautier’s subjects but prepare for enthrallment and surprise: These unexpectedly comforting stories of loss mend loss with reminders of our heroic inadequacies to love well. The Loss of All Lost Things is a touching collection of limpidly composed, irresistible stories,tempting to read in a sitting.” Make sure you pick up a copy, either from Amazon or SPD.

-Congrats to Julie Iromuanya, whose debut novel Mr. and Mrs. Doctor made the shortlist for the PEN/Robert W. Bingham Prize! The Bingham Prize honors “an exceptionally talented fiction writer whose debut work—a novel or collection of short stories—represents distinguished literary achievement and suggests great promise. The winner receives a cash award of $25,000, a stipend intended to permit a significant degree of leisure in which to pursue a second work of literary fiction.” Just announced today, this is quite an honor, and very much deserved. Way to go, Julie!

-Yet more congrats are in order, as a couple weeks ago Jaquira Díaz was awarded one of two 2016-2018 Kenyon Review Fellowships! KR fellows are supported for two years while they complete a significant book project and teach one class a semester at Kenyon College. It’s a pretty cool thing. I met Jaquira at the 2012 Key West Literary Seminar as part of what turned out to be an exceptionally talented class of scholarship winners. She’s definitely a writer to watch. 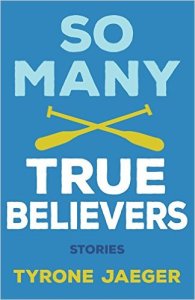 -This is a couple weeks of an early happy book birthday, but check out (and pre-order) So Many True Believers by Tyrone Jaeger, a short story collection that’s due out on February 16 from Queen’s Ferry Press. While still in the planning stages, it looks like I’ll be getting out and doing a few readings/signings with Ty this summer. More on that later, of course, but for now… “So Many True Believers gives voice to the wanton, the restless, and those hellbent on self-destruction. The Nat Mota School for at-risk youth is the nexus of Tyrone Jaeger’s spiraling narrative; loosed from it is an array of characters yearning, raging, and chasing down their misguided dreams. There is Jeremy, mourning the loss of his girlfriend to a UFO cult; Harold, the betrayed husband exploring intimacy in unfamiliar waters; and Ginny, the teenage runaway hiding out with a band of video-obsessed squatters. Mystery, magic, and gritty realism are coiled against a backdrop of failed relationships and addictions in this darkly humorous debut collection depicting the frayed edges of the American psyche.”

-Finally, be sure to check out this interview with Alexander Chee, “Maybe It Was Worth It,” on The Millions this week. In addition to talking about his second novel, The Queen of the Night, which also releases today, Chee addresses at length the issues that confront novelists working in the age of omnipresent social media presence. Here’s a longish excerpt from the interview, and be sure to check out the whole thing over at The Millions:

TM: Did you feel commercial pressure, or worry about your own livelihood?

AC: This is a constant under capitalism though, right? But nothing in the book is there to make it more commercial or I would have used quotation marks around the dialogue. Other people may be able to write cynically, but when I do I want to die. Which was never the point of writing. 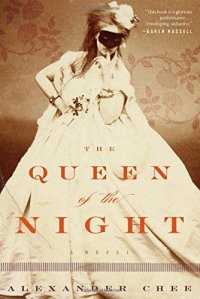 The biggest pressure was when I had run out of the money. I was paid for this book, everything else was essentially unpaid work during which time I also had to work to pay bills. And the longer the novel wasn’t published, the more it seemed to endanger everything in my life — my ability to get teaching work, to successfully apply for grants, my relationship, future projects. Each small delay, each mistake, each wrong turn in the writing became enormous as a result and it was unendurable in the last two years.

The novel also ruined every family holiday vacation for a decade, too — typically the down time between semesters when you can get writing done.

Right near the end, I had a student write a story about the workshop, in which she was unkind to everyone in the class except herself, who she portrayed as a talented writer and a great beauty. This is something that happens at least once in every writing teacher’s life — the student who thinks it is brilliant to write about the class and make everyone talk about what she thinks of them. Me? She portrayed me as a failed writer who couldn’t sell his new book.

All I can say is, I look forward to when this happens to her.