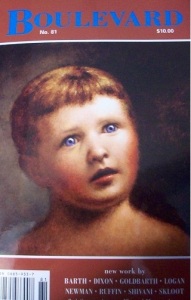 I’m pleased to share the news that my short story “Violate the Leaves” has been accepted for publication by Boulevard and will appear in their Spring 2016 issue!

This will be my fifth story with Boulevard. I’ve written a lot in this space about what the journal means to me, so I’ll keep it brief this time. Thanks to Editor Richard Burgin and Managing Editor Jessica Rogen for everything. (Subscriptions, which include the next three issues, start at $15, btw.) Also, a special thanks to CCB, Amber, and everyone in the winter workshop last December (Amy, Amy, Brian, Bob, Felicity, and Ryan) for their help working on the story. You guys are the best!

“Violate the Leaves” is a story I’ve been working on for quite some time, with parts of the original idea having been developed circa 2003 when I was in undergrad. It’s something I picked at every once in a while until the right elements finally came together last summer when I was at Akademie Schloss Solitude. It’s a father-and-son story about how the two deal with each other during a summer when the boy’s mother is overseas, in Iraq. The story is told in a fragmented voice, something I’ve been experimenting with a lot the past couple years. A spare, reticent voice has almost always been a hallmark of my work and I this story tries to push things further in that direction. This was the first thing I worked on while a resident of Schloss Solitude, so it should come as no surprise that the major features include: 1) a parent who leaves his/her family for an extended period, 2) a central character who is nearly incapable of expressing himself verbally, 3) an examination of nationality, and what it means to be a later generation German-American, if anything.

The story is also featured in my collection Bad Faith, forthcoming from Queen’s Ferry Press in July of 2016, and will be a good preview of the book for the dear readers of Boulevard. I have a couple stories coming out this fall and it’s nice to have next year’s calendar starting to fill in a bit as well.

In the evening there were video calls with Mom. She was just getting up. Or just going to bed. I don’t remember what time it would have been over there. She was tired. My father dialed in the PC that sat on the floor next to the television, but he went outside before she answered. I brought the fishbowl downstairs to brag how I was keeping my goldfish alive.

She talked about the food she ate, once the PC was dialed in, the kinds of equipment she had around her neck and in the pockets of her med kit. Her stethoscope, her thermometer. Rubber gloves. Her voice digitized, sometimes doubling over itself in echoes. She always wore her hair up, over there, wore khaki tee shirts that fit tight around her. She smiled big when she saw me. So big the video broke up in pixilation. She asked how my day went and told me about her day. She tried to tell me about the people she worked with, or the bunker she rushed to if the Sense & Warn detected incoming, she said; and the geography, the mounds of desert that blew in under the doorways; and on the airplane going over, watching the sunset and sunrise only three hours apart over the Arctic Ocean.

I didn’t hear any of that.

If she told me to shut up about asking when she was coming home, I would.