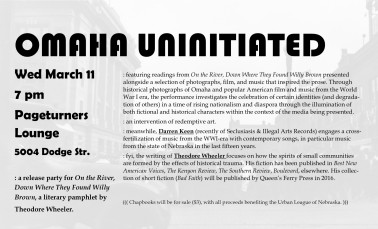 In anticipation of the “Quotes & Appropriation” workshop later this week, which will also mark the launch of my debut chapbook, the blog of Akademie Schloss Solitude has posted an excerpt from On the River, Down Where They Found Willy Brown. Check out the post here.

If you’ve been wondering exactly what the presentation/performance I’ve been developing with Darren Keen, and the workshop itself, is all about, this thesis from the post sheds some light on the matter.

Being as old as art itself, the concept of appropriation expounds and challenges crucial topics in the art world such as authorship, originality and intellectual property. With the development of digital media, new forms of communication have emerged, and sharing, exchanging and copying became an everyday operation. Akademie Schloss Solitude is taking up the controversial debate about the concepts of plagiarism and appropriation in a two-year project on the status of the author in the 21st century. Starting point will be the workshop »Quotes & Appropriation«, February 19 and 20, 2015, which will be opened by a reading/performance by former fellow Theodore Wheeler. The writer from Omaha/NE, USA will be showing his way of exercising appropriation: The presentation of his latest book On the River, Down Where They Found Willy Brown (Edition Solitude 2015, available as an e-book) will include historical photographs of Omaha and popular American film and music from the World War I era, illustrating the production of a novella as a combination of primary historical sources, literary influences, and original prose, »suggesting that a book is as much as about the process of its creation as it is about its content.«

We’re super excited to finally get this show on the road. It will be nice to be back at Solitude for a little while too. I’m going to get me some Afri Cola, some bretzel buns, some döner kebap mit brötchen. That, and we’re going to rock the performance.

Here’s the cover image for my forthcoming chapbook (“On the River, Down Where They Found Willy Brown”) that will be published by Reihe Projektiv/Edition Solitude later this winter, in late February, to be exact.

This will be the first writing I’ve had published about the Omaha Race Riot of 1919 and the lynching of Will Brown at the Douglas County Courthouse. I’ve posted here many times on the subject, one I’ve been researching and writing fiction about for over five years now. I’

m both excited and nervous to finally be sharing this work with audiences. Hopefully it’s found to be pertinent and well-considered work.

The chapbook will be released in conjunction with my upcoming presentation at Akademie Schloss Solitude as part of their two-day, cross-discipline workshop titled “Quotes and Appropriation.” DJ Darren Keen and I have been hard at work on our opening night event that will feature readings from the chapbook and a DJ set from a melange of music that was important to the writing of the chapbook, plus a presentation of photographs and film from my research. It will be a good time.

If you heard me read at the Key West Literary Seminar in January, Solitude Nacht in July, or in December at the Fair Use Reading Series in Benson, this is some of the same material. It includes what I read then and quite a bit more.

If you’re interested in acquiring a copy of the book, the best way would be to just stop in at Akademie Schloss Solitude in February and pick up a copy at the event. If Stuttgart is a little far afield, other options will be available thereafter, hopefully in both hardcopy and digital editions. More on that to come.

Many thanks to Todd Seabrook (editor/designer with The Cupboard) for his work on the cover and book design. He’s great. If you’re looking for someone to work with on a chapbook project, he’s your guy.

There will be more of a formal announcement for all this soon, but I’ve been itching to share about a project I’ve been working on as part of my association with Akademie Schloss Solitude, so here you go.

This upcoming February I’ll return to Germany to participate with other fellows and guests of the Akademie in a two-day, cross-discipline workshop titled “Quotes and Appropriation.” I’m very excited to return to Stuttgart for this, as its a culmination and redirection of the book project I’ve been working on the past five years.

In addition to panels and workshops, there will be an opening night presentation called “Omaha Uninitiated: Music, Cultural Artifact, and Historical Event in the Recreation of Civic Trauma.” This project contains three elements–a set of readings from On the River, Down Where They Found Willy Brown, a novella based on events surrounding the Omaha Courthouse Lynching of 1919 (more on this below); a presentation of photographs and video that have been important to the creation of On the River, and my related full-length novel The Uninitiated; and a DJ performance by Darren Keen.

It will be amazing to bring five year’s worth of research and writing on this topic to Germany, and I’m particularly excited to see what Darren comes up with for the music component, what will be a mashup and cross-fertilization of music from the World War I era that was important to the creation of the novel (ragtime, propaganda music, American folk, jazz) mixed with music from Nebraska in the last fifteen years.

The final part of all this is publication of the aforementioned novella (On the River, Down Where They Found Willy Brown) by the Reihe Projektiv imprint of Edition Solitude. If you heard me read at the Key West Literary Seminar in January, Solitude Nacht in July, or last Friday at the Fair Use Reading Series in Benson, that is some of the same material. Todd Seabrook (editor/designer with The Cupboard) is working on the design and I’m pretty excited how it’s turning out.

More on all this later.